I approached a friend to model for a cast……..
I think I was more nervous than she was, so I checked with her continuously to see if she would “chicken out”, but no ! I was not getting out of it.

When my model arrived (early), we spoke about a few possible poses and decided on one. So, what we decided was to mould half her face, chest and tummy, with her arms more or less raised above her head (horizontally, of course). We taped a black bag around her waist to protect her clothes and she assumed the pose over a beanbag.

And so we began. I whipped out a can of pan spray (in SA we call it ‘Spray and Cook’- not to push any brands !) and put a liberal coating of it over her bra. I took shampoo, and covered some of her her that would be exposed to the moulding. The stuff can stick like crazy, if you are not careful. 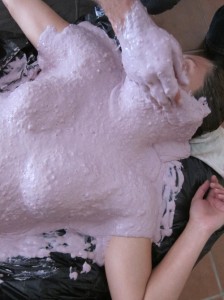 I mixed about 1/2 a bucket of moulding gel, and thinking that it could stand for a little while, left it, only to discover that it set almost straight away…….a nice ‘bucket mould’, which was thrown away!!! Ok, so, lesson learned.

I mixed another batch and went straight to work, by pouring it over my model. With the temperature change, it started setting very quickly. I had to work very quickly to make sure that I had a thick enough layer and that it wasn’t forming any bubbles. With the torso done, i mixed another smaller batch and applied it to her face and one ear. It was funny seeing an almost glazed look in her eyes, as she went to “another place”. Make no mistake, it’s a pretty claustrophobic experience.

That done, I then mixed 1/2 a bucket of plaster, which I then applied over the moulding gel. The reason for this, is to provide a shell casing, otherwise the mould would collapse under it’s own weight. I left her for another 15 min so that everything could set properly.
During that time, we took a few pics. Up until that point I was hecticly busy, and no time to stop, or think. the materials are expensive, and I didn’t want any more wastage. 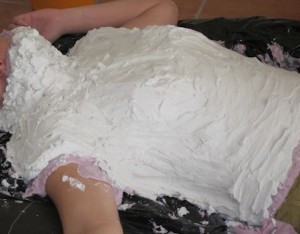 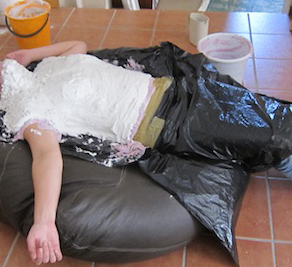 Also, it was vitally important to keep checking with her that she was ok. If she panicked, or was about to faint, I needed to be ware, so I could rip the mould off straight away.

Removing the mould was another experience…….
We found that her bra was going to challenge us a bit. It had stuck around the edges, so parts had to be manually freed, and then I had a mean streak / brainwave….!!!! I reached under the mould on her shoulders, grabbed her bra straps and yanked them !!!. Not nice of me, but it worked. Everything came off, with a minor tear in the mould and her dignity mostly intact.

Then we paused for a few more photos, with the model holding her mould. 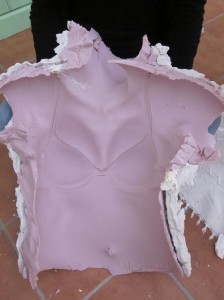 The casting started straight away because the mould tends to dry out very quickly. I poured plaster into the mould and built up a nice thick layer. Now, I tend to be a little impatience when excited, so I tried to demould to quickly and ended up cracking the cast, almost in half. A quick fix sorted that out to a degree, and I waited, and waited…..and waited. 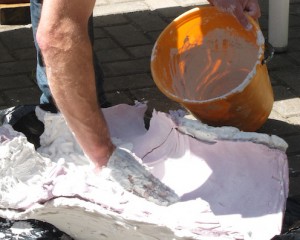 Eventually, I demoulded the cast. Wow, what fantastic detail!!! And so, we took more photos!!!

I quick poured more plaster into the mould, and cast half of it for a slightly different effect. I did leave that one long enough, because we all had to go to a party. But…. I did leave slightly earlier than everyone else !!
That cast, too was great. It the one that the model chose for herself.

Now the other “hard” work started. I had to clean up the cast, because it did have some blemishes. Where the tear happen, left a nice Frankenstein scar across her neck, which had to be sculptured out. Both cast have been cleaned up and have had a few days in the sun to dry out.

I am now busy painting them. The idea is to have a bronze look with a little brown and green patina(rust), and then to mount them on their own pedestals.

But… that will be a seperate point of discussion……..